Way back before there was streaming but long after the rap game had gone digital, blogs ruled the music tastemaker scene. The right post on the right blog could garner an emerging artist a massive fanbase seemingly overnight and many of today’s biggest stars — Big Sean, Drake, J. Cole, Kendrick Lamar, Nicki Minaj, and Wale among them — owe their popularity at least partially to those posts.

However, for every success story, there were quite a few blog favorites who never quite panned out once they got broader exposure. Call it the “big fish, little pond” effect, but many eagerly anticipated newcomers often fell flat once they were called upon to repeat their successes on a larger scale. One of those rappers was Charles Hamilton, whose promising 2009 single “Brooklyn Girls” prompted an outsized buzz that he ultimately failed to capitalize on. When last we heard from Hamilton, he was the recipient of the punch heard ’round the net, and had quietly faded into quasi obscurity.

Recently, though, he experienced a renewed surge of attention on Twitter. Unfortunately for him, it wasn’t due to his music but once again due to his antics and his poorly timed comments to a woman who promptly put him in his place. His target? Doja Cat.

“Doja, you gotta chill,” he wrote. “The whole world is watching and, yes, judging you. Time to grow up. I know. Sucks. But… yeah.” Hamilton even had the audacity to tag the “Kiss Me More” performer in his tweet, which he followed up with another pointed missive undercutting Doja’s recently expressed desire to collaborate with well-respected producer 9th Wonder. “Also, @dojacat is talking about being on 9th beats,” he noted. “Meaning, she wants to be taken serious (as a spitter). I’m just saying she should take herself more serious. She, like I said, is already rockin’ the world.” 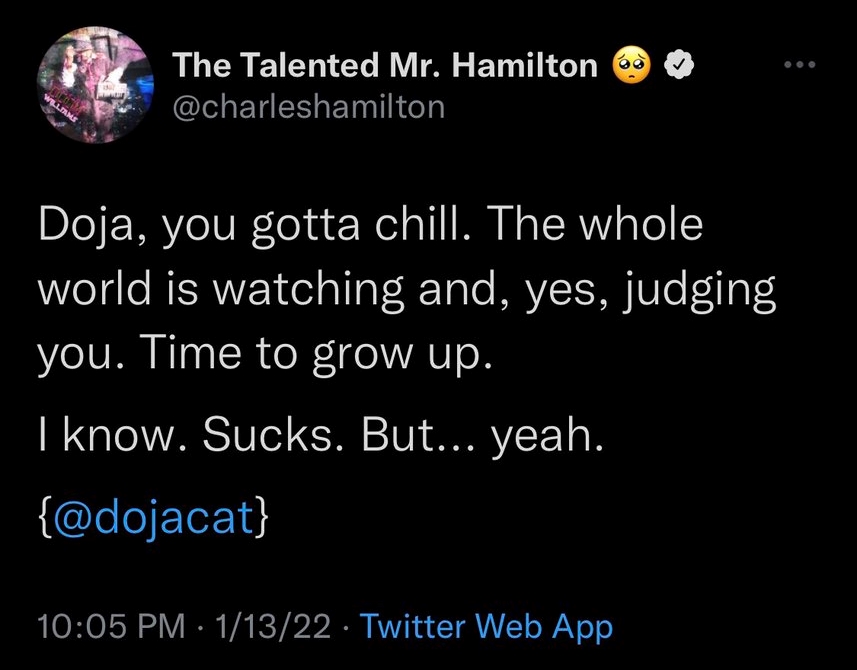 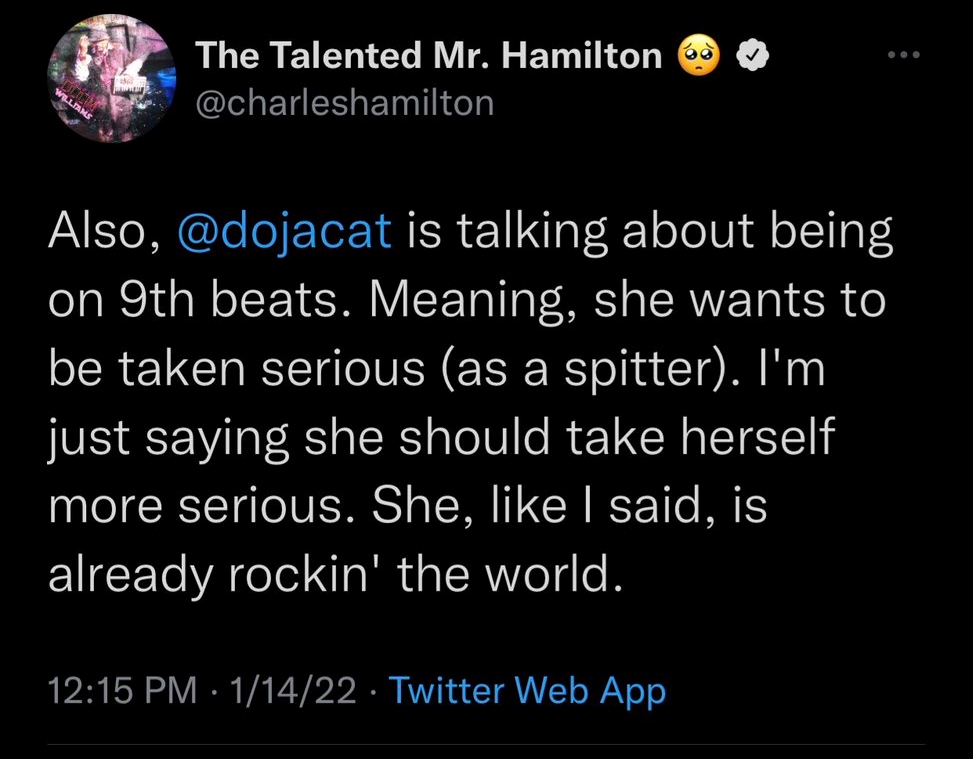 The backhanded compliments went over poorly with fans, and trying to head off the backlash, he dug the hole deeper. “I wasn’t hating on Doja Cat,” he lied. “I’m just asking her to take herself serious. She’s already one of the elite females in music [editor’s note: If that ain’t a red flag]. I don’t want to hear her ridiculed for being silly. Like I was at one point. Y’all can chill out now.” While he might feel like he has a point, he wasn’t ridiculed for being silly so much as lying about collaborating with J Dilla and, again, getting punched in the face on camera for overstepping his bounds while addressing a woman. Sounds familiar, I don’t know.

To her credit, Doja — who is no stranger to the criticism of contemporaries and elders, having taken flak from NORE and Nas for online scandals that were twisted by detractors — handled the situation perfectly, with her usual blend of poise and absurdist humor. “Bro i thought you were Anthony Hamilton,” she joked. “i was about to tell my whole family I was so excited.” She followed up by ridiculing Hamilton’s biggest hit, clowning that “u that one dude that was like “’ABADABADABA BROOKLYN GIRLS.’” Ouch. Well, at least Charles Hamilton can take solace in the fact that this time, he only got dunked on instead of punched in the face. Maybe this time, he’ll learn his lesson.

Bro i thought you were Anthony Hamilton i was about to tell my whole family I was so excited. https://t.co/ffNgprXGmd

u that one dude that was like “YABADABADABA BROOKLYN GIRLS” https://t.co/fiRl9aayMC

BRO I FEEL SO FUCKIN DUMB. IMAGINE HE WAS ANTHONY HAMILTON THOUGH?!?!?