In 1973 DJ Kool Herc and his friend MC Coke La Rock performed together at a party in the Bronx, New York. Since day dot the spirit of collaboration and cross-creativity have been at the foundation of Hip-Hop and has remained at the core of the genre ever since.

Recently certain events have made face-to-face collaboration a little more tricky but iconic Irish whiskey brand Jameson has been busy encouraging collaboration by connecting musicians and artists across the world with each other through their new initiative Jameson Connects. Jameson has a history of continuing to support talent they believe in and are not one of those who do the one campaign and forget ya kind of thing. One such artist is Bas.

The Queens-based rapper signed to J.Coles Dreamville Records received critical acclaim for his 2018 album Milky Way, cementing Bas’s place in Hip-Hop but standing out from the majority of albums that year by truly exemplifying Bas’s global musical taste bringing in sounds from Africa to Brazil to accompany his New-York flow.

Bas had planned to run a series of youth music workshops in Sudan, the homeland of his parents, to help give back to his culture and community. Sadly due to Covid-19 plans had to change. As a long time collaborator with Jameson having previously visited their Ireland distillery several times and performing at their Jameson Connects concert in Kenya in 2018, Jameson stepped in to help flip the script offering instead to connect Bas with two up and coming musicians from across the globe to mentor and collaborate with, producing a new track with each artist.

We caught up with Bas to chat about the importance of collaboration, his project with Jameson, and his ongoing global music workshops.

You work very closely with your collective Fiends how have you been collaborating during lockdown?

I think a lot of it’s just sending each other songs. We collaborate so often and so easily a lot of it has just been sending songs back and forth. But mostly it’s just getting an ear because we’re not around each other as much. Like, “Yo, what do you think of this?” or, “I’m going in this direction.” You know what I mean? “What do you think of these drums?” Whatever the case may be. It’s been more trying to find constructive feedback just in the midst of the isolation, so you’re not just sitting at home pressing play on your own record the whole time.

Would you say you’re reaching out and working together more than you used to?

I think for me, obviously, with our camp, I’ve grown so comfortable and used to and our access is just unlimited to each other. But I think this time has helped me work with a lot of people that I wasn’t working with and that I wanted to bring on, or guys that I had been a fan of and be like, “Well, this guy could help my sound tremendously,” or, “This artist would fit this direction I’m going in.” And you’re finding that right now people are very responsive, they got a lot of time. It’s easier to get ideas back and forth or whatever the case may be. It’s easier to work with new producers. It’s as simple as reaching out on Instagram 90% of the time. 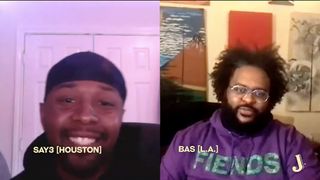 It‘s almost like we’re going back to this more bedroom DIY aesthetic in a way. Not in the sound but in the way we’re creating. It’s got a little bit more like the early days. Do you know what I mean?

Yeah. You know what? It’s got the spirit of the early days but the kind of technology, which is kind of cool. Because you’re seeing people do Zoom sessions. You’re seeing producers from across the world link up and really run it through the interface where it doesn’t even sound like this, it sounds just clear as it would in a studio where it’s been made and co-producing records that way. Or even what we’re doing with Loah which is helping her for the Jameson Connects tracks, helping her finish the songs as far as a production standpoint. We spent the whole episode with her and my producer Ron Gilmore, and he’s just playing drums, percussion, strings, chords, and letting her decide what she likes, what she doesn’t. Yeah, I think it’s super-cool like that. That spirit is there and people in the house, they want to connect with people, they want to reach out, and making music is one of the best ways to do that.

Do you think your creativity and spirit of collaboration has grown?

Absolutely my spirit of collaboration, but it’s always been at the forefront of what I do. It’s always been a major driving force of my music. I can’t lie and say I’m extra creative. It’s not the most inspiring of times in a weird way, because you can catch yourself in a rut, which I’m sure a lot of the world is, just waking up in the same four walls every day.  And just having your whole lifestyle disrupted. But somebody once told me inspiration’s for amateurs. You know what I mean? If you just buckle down and sit down and throw that beat on and, “I’m not going anywhere till I write a song today,” you know what I mean, nine times out of 10 you’re going to write a good song because you have the capabilities to. So, I think it’s just about having that mental fortitude to just break through that.

Tell us about the artists you will be collaborating with for Jameson Connects?

I had the opportunity to pick these artists through some of the connections and the people Jameson was already working with and they just stuck out to me. Loah’s just got this incredible voice and she just sounds beautiful over just open, acoustic type of records. And Say3 he’s just hard. Honestly. I’m looking forward to getting more production from him after he does his remix. Because I was able to obviously discover all these artists through Jameson Connects and they’re just all just so dope, hella talent, making this very enjoyable, this experience. The biggest part of the collaborative process is catching a vibe with somebody, which initially I might have had reservations going, “How is this going to be? I’ve never done anything like this,” where your first meeting is over Zoom and then every session and everything since. But like we said earlier, it’s cool to see that same spirit of collaboration enhanced with this tech that we have available to us.

I know you were meant to do these music workshops in Africa and want to get out there as soon as you can. What’s the plan with these?

We had two plans. I would do this work with my friend Ali, who’s known as MixedbyAli from TDE (Top Dawg Entertainment). He’s probably the biggest engineer in the hip-hop game. He does everything from Kendrick Lamar to the late, great Nipsey Hussle, to YG, to my music, all the TDE camp. The guy, he’s done it all. He brought me along initially to go to Japan and do one of the workshops, and then we just figured we could do these in more places. It was really gratifying just to, like I said, again, just collaborate with new people, give them some of the knowledge we have, and in the process visit a bunch of cool places anyway. We had one planned to do in Sudan. Obviously, I’m Sudanese, my family’s from Sudan. And there was a revolution about a year ago from April, and this was the one-year anniversary of what’s been so far a much more liberal and non-repressive regime where the arts are allowed to flourish for the first time in 30, 40-some-odd years. So, we were looking forward to doing that. We were going to take a bunch of equipment, teach them how to record themselves, teach them how to mix themselves, help them out with the songwriting process and just drop all the equipment in and just see how it grows from there. It’s unfortunate we couldn’t do it, but for sure, as soon as things open back up.

Jameson have provided this amazing opportunity to work with these talented up and coming artists. Do you think it’s important that brands support the arts and music in an authentic way?

Yeah. I mean, shout out to everybody at Jameson. They really brought us in like family. They came out to Orlando, it was the first time we linked up. It’s always been a goal of mine in my career to do a show in Africa, and I did my first one when Jameson brought me and the homies out to Kenya which was like a brand-new touring experience. Now, I have a whole network in Nairobi of people I keep in contact with. I went back this December.

We all do a lot of brand collabs in this day and age, but these don’t ever feel like work or something like that. It’s really like a whole experience, like a life experience that I really appreciate. So, I think it’s just cool we’ve always found a fun way to do it. They’ve been real creative with all our collaborations. For sure, I appreciate that. 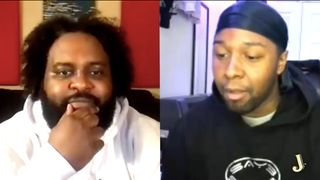 Check out the artists Bas will be working with, singer & songwriter Loah and producer Say3, and stay locked to Jameson’s Youtube to check what Bas and his collaborators drop over the coming weeks and for more lockdown entertainment from Jameson.