East London rapper/poet Kojey Radical is celebrated for his melodic rhythms and masterful lyricism that fluctuates from song to spoken word to rap, dealing with topics of race, love, and mental health. Over the last two years, he’s been on a steady upwards trajectory, ending 2019 on a high after releasing his fourth EP Cashmere Tears, kicking off a collaboration with audio brand Urbanista, and preparing for his biggest headline tour to date.

Radical’s refined sound makes it hard to believe that music wasn’t always his first art form of choice. Growing up, he was a keen artist, wrote poetry, trained as a dancer, and studied art at the London College of Fashion. With such a diverse creative background, he’s developed an astute knack for storytelling and sharp creative vision that sets him apart from his contemporaries. He may only be 27, but there is a level of sophistication to everything that he puts out, from the music to the lyrical dexterity to the carefully selected settings, outfits, and graphics of his videos.

Since lockdown hit, Radical has kept up the momentum, using the enforced pause to work on his long-awaited debut album, a spoken word for the launch of Urbanista’s London earphones, and an hour-long film, Proud of You, made up of over 100 submissions from his community. and released on non-profit organization WHOLE. To add to that, he’s just released a brand new track, Same Boat, featuring singer/songwriter/produced MEREBA.

We caught up with Radical a few weeks ago to talk about addressing mental health in music, how he selects his fits for his videos, and why Urbanista is his headphone brand of choice.

You were midway through a tour when lockdown hit. How does it feel that you’ve suddenly been forced to stop?

At first, it was difficult, I’m not really that good at sitting down like that. But I know that in the grand scheme of things, it’s not a ‘me’ problem. That makes it a lot easier to deal with because apart from not being able to work, which is just essentially doing what I love, I know for the next few months I’ll probably be alright. I have enough. So, I’m just going to count my blessings and make this album.

How have you managed to stay motivated to keep making music?

It’s strange. Certain things just aren’t as important anymore, and you have to almost create the importance within itself. Before I put Proud of You out, a part of me felt like music ain’t important. And I realized it was the most backward thing I ever thought in my life. So then I just got back on that gorilla mind-state, that mind state of just do something. Because it all makes a difference. All these little contributions into a time period that no one expected, there’s no conceivable way it doesn’t affect the future. It’s impossible.

Why did you decide to put Proud of You and start the #imsoimsoproud challenge?

I wanted this snapshot of a particular period during this whole COVID badness, where people came together. I put up an Instagram post asking people to interpret the song with how they feel, to speak about it, considering themselves or someone else. We ended up getting over an hour’s worth of footage from people all over the world, from Namibia to Australia. In the future, it will still exist and I think that’s the main thing. People will always look for instant gratification, but something like that doesn’t go away.

You’ve been open about your personal struggle with your mental health. Was this a conversation you wanted to open up?

I wanted to do something similar with Can’t Go Back, but I think at the time I just wasn’t there yet. With time I think I understood the bigger purpose behind it all. People assume with music, love is the only thing that ties us together or wanting to go to a party or wanting to have loads of sex. When in reality, some of the more troubling moments, some of the more ill-fueled feelings can be what ties us together the best.

Do you feel that mental health is something that isn’t talked about enough in music?

You’re also an artist and studied at the London College of Fashion. Why have you lent towards music and spoken word?

I was doing it all. I wasn’t doing music at all, but I had an idea for a soundtrack and my brain literally said, “Well, you write poetry and you can creatively put together a project whether it’s aesthetically only, for now, you can do that.” Sound has played a big part in all of my creative processes. Whenever I picked up a pencil or I wanted to go paint, I would be listening to music, I’d be rapping.

A lot of my art before music was based on expression. So I think, naturally, when you find yourself stimulated by something new, you want to see how far you can push it. I think what was interesting was people just heard my message more on music, even though it was the same when I was doing art.

Who are your main influences in music?

Talking about fashion, do you have favorite brands? Any grails?

Right now, three. A Cold Wall, Heliot Emil, and Tobias Birk Nielsen. I like utilitarian stuff. I like things really intricate but simple. So if I look at it, I want to be able to see the details, but I don’t want to be like a walking billboard.

How do you select the outfits for your videos?

I never wear anything I don’t love. Me and my stylist Natalie, we make a keen effort to go for graduate collections. We want it fresh off the graduate cuttings. Because it’s just like, “Hey, that is the future, they are the future.” Whether it takes them five, 10, 15 years to become the next Yamamoto. Also, it’s the level of design and how eye-catching it is, like, “What is that and where is that from?” You’re never going to get the answer. 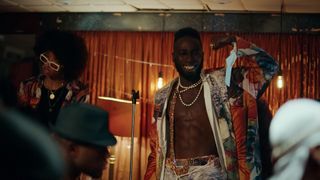 What was the inspiration for the outfits in Cashmere Tears?

One of the mood boards was Janet Jackson’s Got til it’s Gone video, that celebration of melanin within that video piece in the most subtle way. It wasn’t rammed down no one’s throat, it was just there. It was just black people existing excellently. And it provides an energy and a spirit that carries through a narrative without needing one. With all my other videos, there’s a longer deeper message running from start to finish. And I think for that one, we definitely wanted to kind of just say, “Let’s just celebrate for four minutes, and let’s just dress up and feel good.”

You’ve just collaborated with Urbanista on the London earphone. Why did you want to work with them?

I’m a bit of an audio snob. There’s rarely ever a pair of headphones that would make it into being my daily driver or just things I’d walk around with. And I’ve gone through some pods and it was a love-hate relationship, but I think in both audio and style, I found a home with the Urbanista headphones.

How has that been?

It’s been really easy working with them. They were launching the Urbanista London headphones, and prior to Corona, I was going to have a much bigger involvement, especially with the visual and all that kind of stuff. But we adapted because that’s what you do and I was still able to contribute to the visual piece for the overall campaign, which was spoken word.

When did you write the spoken word piece?

I just voiced it actually. Interestingly enough, it was one of the first times where I received the piece and I was like, “Got it.” Sometimes you can try and do too much, but I feel that the best thing I could do is bring it to life. Anything on a piece of paper can read as quite flat, but once you give it some spirit, I’d give it some humanity and give it a consciousness, then it helps do the job in itself.

To finish up, do you have any last words to pass on to aspiring artists, musicians, designers?

If you want to do this forever, then however long it takes is however long it takes. There’s a massive impatience with young artists. Life is hard now, so they want a quick fix. But if you get it now, it’ll be gone tomorrow. Once you got it, keep going. That’s pretty much it.